Here are the 3 videos in the finals. Please vote for one of them on the polls to the right sidebar. Only members are able to vote. If you are not already a member please register first from the forum page. If you clear your cache or reset your IP the second vote will not count. The result showing might not reflect the true actual votes. The only votes that count are the 1st votes that come in from each registered voting member.

The rules for the giveaway were as follows:

Members of Violaman.com and Fiddlerman.com will vote on their favorite video out of the top three most viewed eligible videos.

However, we did not receive three videos until much later than the original deadline. Because of complaints for one of the contestants being an administrator though in reality he is just a contributor, I have decided to remove him as administrator instead of eliminating him from the contest.  I would like to see the winner as a frequent visitor and contributor and therefor cannot see a valid reason to eliminate his entry.

The winner of the CVA-500 will be announced on May 29th if there is not too many questionable votes such as repeated votes from same IP, or many registered users from the same server etc. Please keep this competition fair.

Good luck to all three contestants who did a great job and deserve to win.

Friends, Visitors and Members - new and old - of both Violaman.com and Fiddlerman.com:

Firstly, I’d like to thank each and every one of you who voted in this contest. I’d especially like to thank those long-suffering members of both forums who put up with my constant nagging and thread-bumping in the hopes of convincing just a few more folks to vote. Most of all, I’d like to thank Pierre for the expensive and often thankless job of providing these occasional contests, largely out of his own pocket.

As a fellow-member and sometime Administrator for Violaman.com (all my privileges were suspended for the duration of this contest for fairness’ sake), one of my main goals has always been to engender more participation and develop a growing membership base. Indeed, the very purpose of the contest from the beginning was to draw attention to Violaman.com and hopefully attract new members.

I think we can all say that we succeeded in this goal. If even a few of the newly-registered members choose to participate (and I encourage you all to do so), then our community here will have grown by a sizeable amount.

Competition brings out the best and the worst in people though, and I think it’s fair to say we’ve seen a little of both during the last few days. It’s easy to get caught up in the heat of the moment when there’s something valuable at stake and say or do things that we’re not proud of later. Similarly, it’s easy to become defensive and look for any possible slight or insult where none was intended. Inasmuch as I personally contributed to, allowed to occur, or failed to stem such an environment, I humbly apologize. Violaman.com is intended to be a place where we can learn from and encourage one another and I am sorry if your initial experience here has been less than our intended ideal.

When I went to bed, several hours before the end of voting, I was behind by three votes and considered the contest lost to me. Imagine my astonishment this morning when I discovered that the contest ended in a tie.

I think Jessica put it best when she said it was “just too much,” and I agree.

Pierre and I had a long conversation early this morning and we both agreed that it was time to stick a fork in this contest.

Together, we decided it was time to honor the talent, effort and patience that Jessica put into her entry without any further delays.

To do so, Pierre is graciously allowing me to “donate” my votes to Jessica’s entry.

Congratulations, Jessica. It was a great video and I hope it serves as an introduction to the sort of talent you’ll be adding to the Violaman.com family!

Unfortunately for me, this puts me dead last. Again. Told you I was cursed to never win these contests ...

P.S. Apologies to JMOhara48, your post arrived before I could finish typing my own. Being at work makes it difficult to spend time online in here.

Thanks for being so understanding Keith.

As a thank you and for coming in tie you will be receiving a Fiddlerman Viola Bow.

Congratulations Jessica for winning the CVA-500

Please either email me or PM me your mailing address and if you don't mind, some information that I can include on a post about you.

If I ever come across a viola it will be yours Keith. 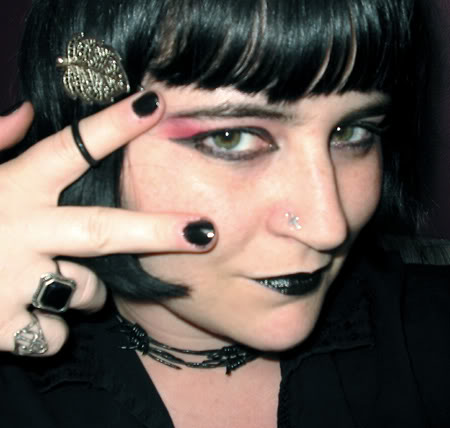 HC, your gesture is very honorable, you have class! Where is the sir emotion when we need it?

FM, your big heart shows again in donating a bow to HC, we are truly blessed to have you in this community!

Wow. I have to say I expected the battle to be raging when I checked the site today. There's so much to say I don't know where to start.

@Kristen - I'm not sure if you've been to the site since you entered, but I'd like to say it was nice competing with you.

@HeadCheese - I hope you take me seriously when I say you are a truly stand-up guy. You've been very cool and respectful throughout this whole competition and if I could share the viola with you I really would. You were a great competitor. The last day or two was pretty crazy and I have to agree with you when you said it brings out the best and worst in people. I think we can all agree it got a little out of control in here and I don't hold anything that was said against anyone, just like I hope nobody holds it against me. I'm a really down to earth person and hopefully that part of me shines through from now on. Some of my friends and family were a bit up in arms last night in the heat of the competition, but after reading your response they have gained respect for the site, and some have even said they were here to stay!

I really want to thank you, it took a lot of class to step down, something I wasn't able to do. And I would love to stay active in this site because I believe in what it is trying to accomplish (although I think I may come here under a different username for awhile because some people may not be too fond of me right now).

@Violaman - A big thank you to you for putting on this competition. I think I can speak for both of us when I say that this didn't go the way we planned. I hope this doesn't deter you from making more contests. As a struggling college student, I wouldn't have been able to continue fulfilling my love of playing the viola if it weren't for you and this website. So I hope you believe me when you say this will really add a lot of joy to my life and I'm very thankful. So I hope in the end you continue giving to others and just use this as a learning experience? I hope there's no hard feelings in the end. Really, thank you

And thanks everyone for your congrats, I am really excited to get back on the "viola horse" and get playing again! As confident as I am, I'm fairly certain I did not get 44 of my own personal friends to vote (if I even have that many

) so a big thank you to everyone who voted for me!

P.s. - @HeadCheese - I'll take just one of your votes if it makes you feel better. That puts you at a close second! The curse is broken?

@NV - Thank you, I really feel like Keith deserves it for what he did.

@Jessica_1 - do please keep the same name. We're all eager to get to know you and follow your progress here. I'm humbled to have had a part in changing your, your family's, and your friend's perception of Violaman.com. That makes it totally worthwhile to me, and is reward enough.

@Kevin - if you do get a viola, please continue the good service you already do in your community and give it to a deserving person who otherwise would go without. I honor you and what you do.

@NV - None of this would have come about if you had voted for me. (NV was Kristen's sole vote, by the way) Your own integrety in voting impatially for your favorite was instrumental in giving everyone this opportunity to be where we are today. Think on that while you tip your OWN hat. 😉 Thank you.

@Violaman - Your offer of the bow is too generous. A gentleman would refuse a reward for doing the right thing at this point, but my altruism does have its limits. LOL I really AM human, after all. Thank you very much!

Very cool of ya HC! Way to "step up" and show you are a good guy. And to Fm who cratiously rewarded your integrity...thank you from me! I thought this was a great contest and I look forward to the next one. Prizes aside, I would enter, (when and if I can get good enough too, lol) and participate just to show my support of Fiddlerman.com and Violaman.com. Keep up the great work Pierre and HC!

Hey Jessica, keep the name. You have arep now and it is going to stick. Don't change just because some others, (I will mention no one!!) are intimidated. You are a cool cat and I look forward to seeing more of YOU not some undercover brother, (or sisiter, lol) Just like the Oliver Garden slogan...when you are here, you are family 😉